When Daffy Dan’s Bargain Town opened in Elizabeth, NJ in 1961 it was a store where you could find all sorts of items for surprisingly low prices (silver dollars were 88 cents). Today, the store specializes in clothing and is simply called Daffy’s.

Daffy’s tagline stakes out a position not that different from many other retailers: “High Fashion. Low Prices.” Their advertising though stands apart. This 1994 Daffy’s ad summed up their positioning statement in an entertaining fashion. 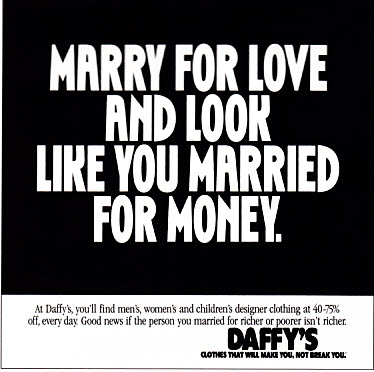 It was just one in a series of headline-driven ads created by agency DeVito/Verdi of NYC. The copywriters credited on the campaign included Abi Aron, Rob Carducci, Mark Sutherland and Audrey DeVries.

Daffy’s apparently felt this headline stood the test of time as it made a reappearance on a subway ad in 2010. Perhaps they ran it again thinking it would connect with people during tough economic times. 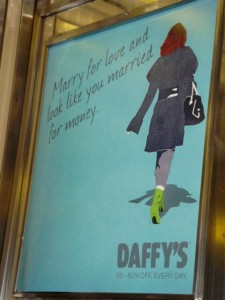 Someone found it offensive though and expressed their disdain on the Internet: “This kind of advertising influences the citizens of America to think that some of our oldest and noblest traditions are done in the pursuit of money which is a completely disgusting and completely unappealing prospect!”

Perhaps that individual is the one who left this unflattering critique on one of the ads: 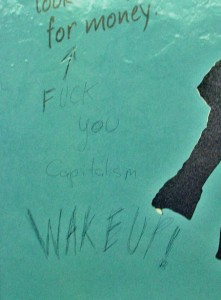 The implication that “you can have your cake and eat it too” resonated with others though. Commenting on her personal blog, one woman declared it “the best ad ever.” 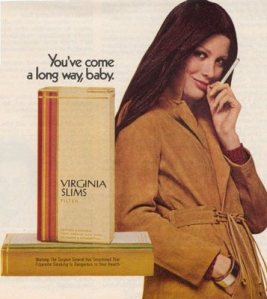 You’ve come a long way, baby? Considering women outnumbered men in the workforce for the first time during this recession, I was surprised to find modern women weren’t offended by the notion they might marry someone for their wealth. Just a half-century ago, few women had the option of working and many did marry for economic security.

A quote from Motivation in Advertising published in 1957 by McGraw-Hill: 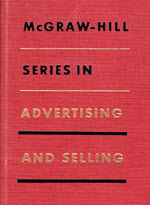 “No girl ever admitted that she picked her husband because he represents economic security. We would consider her a schemer. So she sends out rhapsodic telegrams on her honeymoon: “Never knew love could be so thrilling. He’s wonderful.'”